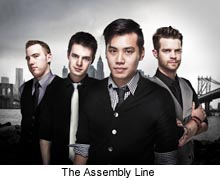 BALTIMORE, 05-11-12---The Maryland Jockey Club announced today that breakout band The Assembly Line will open for main stage powerhouses Maroon 5 and Wiz Khalifa for the Preakness® InfieldFest concert on Saturday, May 19 in the Pimlico public Infield prior to the running of the $1 million Preakness Stakes (Grade I).

The NYC-based indie rock band was brought together by a Craigslist ad and a passion for making music, and has seen success in recent years with placements on MTV and rave reviews in the press for its new video and song, “Full Impartial”.

"We're thrilled to be a part of the InfieldFest and share the stage with other great acts,” said lead singer Thornfin Nguyen. “The Preakness is an American tradition and one of the biggest parties of the year , so we look forward to taking the stage at Pimlico and rooting for Bodemiester to take it!"

Tickets will be $50 in advance through Ticketmaster (www.ticketmaster.com) and the Preakness Ticket Sales Office and $60, beginning Saturday, May 12. Two 160 feet MUG Club areas will be available in the Infield for an additional $20.

Preakness Day is the largest single day sporting event in the state of Maryland with attendance figures topping six-figures in nine of the last 11 years, including a record 121,263 in 2007.

World-renowned tenor Anthony Kearns will be the featured performer during a special military tribute at Pimlico Race Course that will be televised live on NBC Sports next Saturday. Kearns will sing “God Bless America” at approximately 2:45 p.m. E.T. During his performance, the Northrup Grumman B-2 Spirit (also known as a stealth bomber) will make a flyover. There will be a demonstration by the 82nd Airborne Division’s All American Freefall Team (U.S. Army) a few minutes prior to the performance.

"I'm delighted to sing at this year’s historic Preakness, the second jewel in the famed Triple Crown of racing in the United States,” said Kearns. Kearns, the original founding member of The Irish Tenors, noted that Ireland shares a rich history with the American horse industry.

Mr. Kearns said his appearance at the Preakness Stakes combines two of his great passions: music and horses. “I have a great fondness for horses which goes back to my childhood. Adding to this, I am honored to perform during the special military tribute,” he said. “This truly will be a special moment for me.”

Kearns hails from County Wexford, Ireland – home of famed Irish horse trainer Aidan O’Brien – and many great horse breeders, trainers and jockeys. That’s where he “gained an appreciation of horses and the horse industry,” he said.

CONTACT:  To request a media interview or special engagement with Anthony Kearns, please contact Kirsten Fedewa (On behalf of Anthony Kearns) at 202.365.6936 or inquiry@fedewaconsulting.com.

The app is available for download on Apple and will provide instant, real-time access to the latest Preakness® Stakes updates, including news releases, historical data, blogs, wagering information and InfieldFest activities.