NAPRAVNIK HAPPY TO BE HOME; DEPARTING READY TO STEP UP
BALTIMORE, 05-17-13 – Stuart Janney III and Phipps Stable’s Orb galloped an energetic 1 ¼ miles at Pimlico Friday morning, letting exercise rider Jenn Patterson and trainer Shug McGaughey know that he’s ready for Saturday’s 138th running of the Preakness Stakes.
“He took a nice little hold of Jenn, was right on with his leads and moved over the track great, so I couldn’t be more pleased with what I saw,” McGaughey said.
Orb has pleased his trainer every day since he captured the Kentucky Derby by 2 ½ lengths. While training at Belmont, where he produced an eye-catching half-mile workout on Monday, and since arriving at Pimlico Monday afternoon, Orb has given his trainer the same signals he gave off during his pre-Derby training.
“I think it’s been every bit as good. I think maybe his work at Belmont was even better. Since he’s gotten down here, he’s really, really settled in well,” McGaughey said. “He’s been eating really well. I’m very pleased with his appearance and everything is on ‘go.’ ”
Orb, who is the even-money favorite for the nine-horse Preakness, has boosted his trainer’s confidence in his chances to add the Middle Jewel of the Triple Crown to his resume. McGaughey, however, isn’t counting the winner’s share of the $1 million purse just yet.
“There are a lot of ways to lose, as we all know. Freaky things can happen. I think we’re in the position where we can kind of dictate the race and hope, if we don’t get in trouble, that he can make his run and then see what happens,” McGaughey said. “We hope he doesn’t get in trouble; we hope he handles the track; we hope he handles the kickback of dirt; we hope he handles the day. If he does all that, I would have to think it’s going to take a pretty darn good horse to beat him.”
If there has been anything that could possibly be perceived as a negative for Orb, it’s probably his No. 1 post position that may hold at least the slight potential to get him trapped inside.
“I don’t think it’s a problem. I think he’ll be fine; it’s a long distance,” said jockey Joel Rosario, who rode Orb to victory at Churchill Downs two weeks ago.
Rosario’s flawless ride in the Derby did nothing but boost McGaughey’s faith in his jockey’s big-race ability.
“I don’t know if anyone could have ridden him better. He got him over a little bit to get around the first turn without losing a whole lot of ground. He held his position there, got him to the outside and was very patient with him,” McGaughey said. “Being that far back, you might want to move a little bit quicker than you want to and hang. But he was very patient and he told me he was relaxed and got into the flow of the race very well and ‘was just waiting on me.’ “
McGaughey said he wouldn’t give Rosario detailed instructions on how to ride Orb in the Preakness.
“I’m a man of very little instructions, because you never know what’s going to happen once the gate opens,” he said. “We will talk a little bit, but the biggest thing I’ll tell him is, ‘Ride him with confidence.’ ”
Winning the Kentucky Derby for the first time realized a career-long dream, but McGaughey isn’t ready to rest on his laurels.
“I think winning the Derby does take a little pressure off you,” he said. “But I also think that we’re excited about giving him a whirl tomorrow afternoon and see if we can’t get it done so we can go on to the next step.”
MYLUTE – Jockey Rosie Napravnik started her career in Maryland, rode her first winner at Pimlico and returns to Old Hilltop as one of the top stories of the 138th Preakness. The local favorite, now one of the leading riders in the country, followed Derby-winning trainer Shug McGaughey and winning jockey Joel Rosario to the podium for the Friday morning press conference at the Pimlico Stakes Barn. 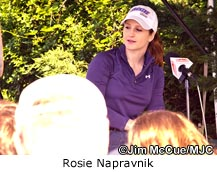