Galiana Sprints to Upset in $100,000 Primonetta

Galiana Sprints to Upset in $100,000 Primonetta 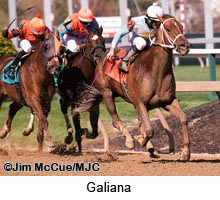 BALTIMORE– Winless in three stakes since opening the year successfully in Florida, Triple R Stables’ Galiana returned to the winner’s circle with a come-from-behind victory in the $100,000 Primonetta Saturday at Pimlico Race Course.

The six-furlong Primonetta for fillies and mares three and up was one of six stakes worth $575,000 on the 10-race program, the first of three big weekends during the Preakness Meet at Pimlico.

Sent off at 8-1 in a field of eight, Galiana ($18) hit the wire in 1:11.27 over a fast main track, 2 ¾ lengths ahead of 2-1 favorite She’s Ordained. It was another neck back to Tarnished in third, followed by 3-1 second choice Sustainable, Aix En Provence, Romantica Mia, Wherethere’sfire and Queen’s Blade.

“Our only concern coming into this race today was that she may not like the track. She’s never run here before, and she can be picky,” trainer Rodolfo Romero said. “Happily, she took to the track today and [jockey Abel] Lezcano rode her well.”

Breaking from post 7, Galiana settled off the pace under Lezcano as Tarnished took the field through a quarter-mile in 23.23 seconds and a half in 46.54. Lezcano swung Galiana three wide at the top of the stretch for a clear run, taking over the top spot in mid-stretch and drawing away.

“We didn’t have much speed today, so we saved ground,” Lezcano said. “At the three-eighths pole I knew my horse was strong. I let him out in the stretch and then, poof, he went.”

A chestnut New York-bred daughter of Stonesider who ran third in the Hurricane Bertie (G3) Feb. 14 at Gulfstream Park, Galiana has now won five stakes among her 12 career victories and pushed her bankroll to $469,121 from 24 starts.

Romero indicated he would point Galiana to the $100,000 Skipat on Black-Eyed Susan Day, May 15, at Pimlico. 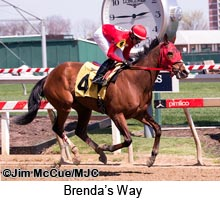 It was the second straight gate-to-wire victory and first career win in a stakes for the 5-year-old mare, who finished second behind Celtic Kate in the 2014 Geisha. Under jockey Jevian Toledo, Brenda’s Way ($4.80) ran 1 1/16 miles in 1:46.78 on a fast main track.

“She works hard, so she’s one that kind of deserves it. It’s a nice win for her,” winning trainer Damon Dilodovico said. “This horse can be very difficult to ride. This is the third time I put Toledo on her and he learned the hard way one of the earlier times when he rode her. You have to completely let her do her thing. If you try to manhandle her, she won’t run for you.”

Brenda’s Way took control early, running a quarter-mile in 23.xx seconds, a half in 46.46 and six furlongs in 1:11.79. She opened up daylight on the field after turning for home as Bazinga B rallied to edge last year’s Geisha winner, Celtic Kate, for second.

“Last time she ran huge,” Toledo said. “This time we felt we could do the same thing. We got into a great spot and she moves so good. When I looked back at the three-eighths pole, I had a horse chasing me and she just moved down the stretch, go go go.”