I'll Have Another Jogs Mile At Pimlico In First Trip To Track Since Derby Win; Went The Day Well Jogs At Fair Hill

I'll Have Another Jogs Mile At Pimlico In First Trip To Track Since Derby Win; Went The Day Well Jogs At Fair Hill 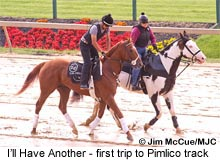 BALTIMORE---05-09-12–Members of trainer Doug O’Neill’s staff liked what the saw Wednesday morning when Kentucky Derby winner I’ll Have Another made his first trip to the track at Pimlico Race Course, the site of his next start, the 137th running of the Preakness Stakes (G1) on May 19.

Following what is a typical post-race approach, Reddam Racing’s I’ll Have Another was limited to walking for the first three days following the Derby. The program changed on day four and he was saddled and sent out for a tour of the Pimlico oval.  Under exercise rider Johnny Garcia, the son of Flower Alley left the barn at 8:30 a.m., immediately following the renovation break. With a lead pony alongside he jogged once around the course, then headed back to Barn D, where he cooled out, was given a bath and returned to his stall. 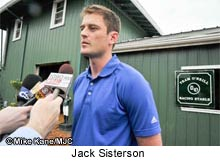 From the gap at the top of the stretch, O’Neill’s assistant, Jack Sisterson, watched the chestnut move down the stretch, past the finish line and around the first turn before be disappeared from view. A few minutes later, Garcia and I’ll Have Another reappeared as they approached the second turn.

“He got over the ground really well, his ears were pricked and he was full of energy,” Sisterson said.

The O’Neill team felt that its colt had come out of the Derby in terrific shape and has been watching him for any signs of fatigue. He passed another test Wednesday.

“His energy level is fantastic, something that we want to see his first time back on the track,” Sisterson said. “You wouldn’t want to see him with his head down going along there.”

After three quiet days, I’ll Have Another was interested in stretching his legs a bit while seeing more of Pimlico.

“As soon as he knew he was going back to the track, he was full of energy,” Sisterson said. “He knows what he’s doing. Obviously, he couldn’t wait to get back out there. It’s as if he’s never had a race. He’s doing fantastic.”

Sisterson oversaw the shipping of I’ll Have Another from Kentucky to Maryland on Monday and said everything has gone smoothly at Pimlico. The colt settled in at Barn D, is eating well and appeared to be comfortable on the muddy track.

Sisterson said he’s most impressed with I’ll Have Another’s ability to adapt to what he encounters.

“It’s the way he takes it all in,” he said. “We shipped him into Kentucky and it was like he was stabled his whole life there. He came out of the race as if he never ran. He shipped great. He went out to the track fantastic this morning.

“If after he won the Santa Anita Derby we got a pen out and wrote down what we would like to see, he’s showing us that.”

Garcia moved from Mexico to California nine years ago and has been a member of O’Neill’s staff for five years. Most mornings, he rides 10 to 12 horses. He has been aboard I’ll Have Another daily since the colt arrived at O’Neill’s barn at Santa Anita last year.

“I remember getting on him the first time. He felt good,” Garcia said. “I told everybody, ‘I like that horse.’ He’s got a long stride and when he’s breezing, he is very impressive. I said, ‘Maybe this horse is really good.’’’

“When he started for the first time,” Garcia said, “I said, ‘That one’s the winner.’ He did win.”

I’ll Have Another broke his maiden on July 3 at Hollywood Park and finished second to Creative Cause in the Best Pal Stakes (G2) on Aug. 7 at Del Mar, but he was never in contention and finished sixth in the Hopeful (G1) in the mud at Saratoga on Sept. 5. He is perfect in his three starts this year: the Robert Lewis (G2), the Santa Anita Derby (G1) and the Kentucky Derby (G1).

Garcia’s smile widened when asked to describe what it means to be connected to a Derby winner.

“It feels good,” he said.  “It’s my first time in the Kentucky Derby and we were  lucky to win that race.”

I’ll Have Another is expected to train Thursday morning at 8:30, after the renovation break. O’Neill will be on-site to supervise Preakness preparations after arriving from Southern California, where he has been since Sunday afternoon.

“He walked and was turned out in the round pen and went out for a jog,” said Motion, noting his pleasure with the manner in which the son of Proud Citizen has come out of the Derby.

Exercise rider Zeke Castro was aboard for the light exercise around the grassy trails of the bucolic training center. Went the Day Well is slated to return to the track later this week.

Zayat Stables LLC and Michel and Tiffany Moreno’s Bodemeister was first out at 6:30 on a mild, clear morning. The Arkansas Derby (G1) winner jogged a mile under George Alvarez with assistant trainer Jim Barnes alongside on a pony.

Both colts are considered as possible for the Preakness, but no decision will be made until Baffert returns to Louisville from Southern California this weekend.

HIERRO/ISN’T HE CLEVER – J. Kirk and Judy Robison’s Isn’t He Clever, eighth in the Arkansas Derby (G1) in his most recent start, returned to the track Wednesday morning for the first time since working five furlongs in company in 1:02 on Monday.

Isn’t He Clever remains under consideration for the Preakness.

“If they are nominated, they are possible,” trainer Steve Asmussen said with a smile.

Another possible Preakness horse in the Asmussen barn is Stonestreet Stables LLC’s Hierro, winner of The Cliff’s Edge Derby Trial (G3) on April 28.

“We have made no decision on the Preakness,” said Lesley Howard, a Stonestreet spokesperson. “We likely will not make a decision until next Monday or Tuesday.”

COZZETTI/DULLAHAN –Donegal Racing’s Dullahan, a fast-closing third in the Kentucky Derby 138 on Saturday, returned to the track Wednesday. With exercise rider Faustino Aguilar up, Dullahan jogged twice around shortly before the track closed at 10 a.m.

Also returning to the track was the Albaugh Family Stables LLC’sCozzetti, the fourth-place finisher in the Arkansas Derby (G1) who had worked five furlongs in 1:01 on Monday. Under exercise rider Romero Cordache, Cozzetti jogged twice around shortly after the track opened at 6 a.m.

Dullahan is under consideration for the Preakness while Cozzetti is termed probable by trainer Dale Romans.

“We’ve always been hoping that (the Preakness) was going to be his biggest effort,” Correas said Wednesday morning. “With everything that he’s doing, it looks that way. He’s going in the right direction.”

Tiger Walk has raced competitively in three graded-stakes appearances at Aqueduct this year, finishing third in the Withers (G3) before a pair of fourth-place finishes in the Gotham (G3) and Wood Memorial (G1).

“I think a mile and three-sixteenths will help him,” Correas said. “We always thought a mile and a quarter, mile and a half, would be good for him.”

Correas said that Tiger Walk will work a half-mile at Pimlico on Sunday.

“We’re going to put cheaters on him to give him a little more focus,” said Correas, who expects Tiger Walk to wear the cheater blinkers in the Preakness.

Jockey Horacio Karamanos will be aboard for the workout, but a final decision on who will ride the son of Tale of the Cat in the Preakness has not been determined.

It was the first day back to the track since the Derby for the Mike Maker trainee.

“I liked what I saw,” said trainer D. Wayne Lukas, winner of the Preakness five times, who has saddled a record 36 starters in the race.

While the Preakness is rightfully the centerpiece of the Pimlico spring meeting, fifteen other stakes (six graded) for thoroughbreds will provide a weekend full of excitement for racing fans. A total of 504 horses were nominated to those added-money races.

The Pimlico racing office will draw the May 18 card on Sunday.

In addition, the $75,000 President of UAE Cup, a G1 race for purebred Arabian horses, drew fifteen nominations. The race is limited to 14 horses and will be run on the main track at 1-1/16 miles.

The Pimlico racing office will draw the May 19 card, a week from today.