I'll Have Another Shines At Pimlico, Derby Winner Hasn't Missed A Beat; Desormeaux To Ride In Preakness

I'll Have Another Shines At Pimlico, Derby Winner Hasn't Missed A Beat; Desormeaux To Ride In Preakness 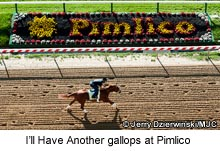 BALTIMORE– 05-11-12 – Trainer Doug O’Neill liked what he saw before, during and after I’ll Have Another’s “fantastic “gallop Friday morning at Pimlico Race Course, where the son of Flower Alley is preparing for a start in Preakness 137 on May 19.

O’Neill paused during a media interview session to marvel at the gleaming chestnut coat of Reddam Racing’s Kentucky Derby winner, who bathed in the bright morning sun while being given a post-gallop bath.

“Look at that coat. He’s handled everything. He shipped from California to Kentucky and now to Maryland. He hasn’t missed a beat. An average horse couldn’t do that. As you ask horses to do things like this, the average horse would lose his appetite and you’d have to back off and slow down,” O’Neill said. “I’ll Have Another has just been thriving on it. The more we ask him the more he gives. His overall appearance and energy level are just sensational.”

I’ll Have Another has won three straight starts this year, capturing the Robert Lewis (G2) and the Santa Anita Derby (G1) before scoring by 1 ½ lengths over pacesetter Bodemeister in the Kentucky Derby. O’Neil said it takes a very special horse to accomplish what I’ll Have Another has accomplished while remaining at the top of his game.

“He’s a very confident colt. He’s a very relaxed colt. He sleeps a lot in his stall, which is a great sign of a big horse. He’s very reserved. Then, on the track he’s got a lot of energy and spunk, but not nervous energy,” O’Neill said. “If he were human, he would have been somebody on stage doing Broadway or a top athlete. He likes the spotlight. He thrives on the attention. That’s a special quality.”

The race will kick off a busy Preakness Week schedule of events for O’Neill, who will attend the Baltimore Ravens rookie mini-camp in Owings Mills on Sunday (11:15 a.m. to 1 p.m.). On Tuesday, the 43-year-old native of Dearborn, Mich. will pay a visit to Johns Hopkins Children’s Hospital before moving on to Orioles Park at Camden Yards to throw out the ceremonial first pitch for the O’s game against the New York Yankees (7:05). On Wednesday, he and jockey Mario Gutierrez will visit the Boys & Girls Club at CC Jackson Recreation Center, near Pimlico.

COZZETTI/DULLAHAN –Jerry Crawford, managing partner of Donegal Racing, announced today that Dullahan, the two-time Grade 1 winner and third-place finisher in this year’s Kentucky Derby, will race next in the Belmont Stakes on June 9.

“(Trainer) Dale Romans loves the way Dullahan came out of the Kentucky Derby and believes we could win the Preakness,” Crawford said. “But we believe we have a 3-year-old ‘Horse of the Year’ candidate and that his future is best served by not asking him to race for the third time in just five weeks in the Preakness.”

Romans, who saddled Shackleford to win the 2011 Preakness, will be attempting to become the first trainer to take consecutive runnings of the Preakness since Bob Baffert won in 2001 with Point Given and 2002 with War Emblem.

TIGER WALK– Following the defection of Dullahan from Preakness consideration, jockey Kent Desormeaux has signed on to ride Tiger Walk, who is owned by Kevin Plank’s Sagamore Farm.

“I think he’ll really fit the horse,” trainer Ignacio Correas said of the Hall of Fame rider who dominated the Maryland circuit in the late 1980s.

“He walked, got turned out and galloped a mile on the main track,” trainer Graham Motion said.

Went the Day Well’s stall is directly across from the one occupied by Animal Kingdom, the 2011 Kentucky Derby winner who finished a close second behind Shackleford in last year’s Preakness.

Animal Kingdom is recovering from an injury suffered after winning his 2012 debut at Gulfstream Park on Feb. 18.

“He’s going to go for a bone scan next week, which is a follow-up to the bone scan he had in Florida. If he gets the green light, we’ll start him back in light training,” Motion said.

Went the Day Well is scheduled to ship from Fair Hill in Elkton, Md. to Pimlico next week, as early as Tuesday.

CREATIVE CAUSE– Trainer Mike Harrington sent his gray colt out to jog a mile and gallop a mile Friday morning at Hollywood Park.

Heinz Steinmann’s fifth-place Kentucky Derby finisher remains a candidate for the Preakness. Harrington hopes to make a decision by Sunday, but could wait as late as Tuesday to make the call on whether to ship to Baltimore on Wednesday.

Harrington said Creative Cause was friskier on Friday than on Thursday, when he described him as being quieter than normal.

TEETH OF THE DOG– J. W. Singer LLC’s Teeth of the Dog galloped 1 ½ miles at Fair Hill Training Center Friday morning in preparation for the Preakness. The son of Bluegrass Cat had been entered in Saturday’s Peter Pan (G2) at Belmont but will be scratched in favor of a start in the Middle Jewel of the Triple Crown.Trainer Michael Matz hasn’t decided when Teeth of the Dog will ship from his Elkton, Md. stable to Pimlico.

ZETTERHOLM– Trainer Richard Dutrow Jr. confirmed Friday that the New York-bred colt will skip the Peter Pan (G2) at Belmont Park on Saturday and ship to Pimlico Race Course to run in the Preakness.

Dutrow decided to scratch out of the Peter Pan after Coley Blind, the Maryland Jockey Club’s stakes coordinator, told him that Zetterholm would make it into the Preakness field. Zetterholm will gallop at Aqueduct Racetrack Saturday morning before being shipped to Baltimore.

“We’re ready to roll,” Dutrow said. “We don’t know if our horse can be doing any better. We’re very, very happy with him, and we have been for the last few months. He’s been fun to be around and we haven’t had to worry about anything with him.”

Zetterholm, bred by Anthony Grey and owned by Winter Park Partners, is on a three-race winning streak.

Although he had yet to finalize his plans, Dutrow said the Silver Train colt may have a work at Pimlico on Sunday morning.

“I want him to get a breeze over the track and have some gallops, so he can get familiar with it,” Dutrow said.

Baffert told Pimlico stakes coordinator Coley Blind that Zayat Stables’ Paynter, the runner-up in The Cliff’s Edge Derby Trial (G3), is not being considered for the Preakness but will make the trip to Baltimore to run in an allowance race on the Preakness undercard.

According to Dr. Hansen, the Preakness remains a possibility for his colt.

“There are a lot of variables involved, but it will probably be a last-minute decision next Monday or Tuesday,” Hansen said. “Mike wants to see how he is doing and look at who is going to be in the field and so forth.”

Dr. Hansen said the goal for the horse is to get another Eclipse Award this year.

“It is a tough call,” Hansen said of the Preakness. “We want him to be the 3-year-old champion, but to do that, he has to win one of the classics.

“The mile and three-sixteenths (of the Preakness) may be a little bit out of his best distance. I think he is best between seven and nine furlongs but he can go more than nine if he is calm and relaxed like he was in the Gotham (G3).”

Friday was the third day back to the track for Hansen, who finished ninth in the Kentucky Derby.

“He looks very good out there,” Maker said. “It looks like he came out of the race very well.”

Both Steve Asmussen trainees are considered as possible participants in the Preakness.

Trained by D. Wayne Lukas, Optimizer is scheduled to van to Pimlico on Tuesday.

Corey Nakatani will ride Optimizer for the first time in the Preakness.

PRETENSION– Trainer Chris Grove said Friday morning that a decision has yet to be made on the Preakness status for Kidwells Petite Stable’s Pretension.

“We’re just going along as if we were running,” said Grove, whose Canonero II Stakes winner galloped 1 ½ miles at Bowie Training Center.