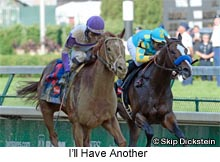 BALTIMORE, 05-06-12---I’ll Have Another finished fast to win the Kentucky Derby (G1) Saturday and he isn’t wasting any time getting to Pimlico Race Course to begin preparations for the 137th running of the Preakness® Stakes (G1) on Saturday, May 19.

Breaking the recent form of Kentucky Derby winners, I’ll Have Another is scheduled to travel from Louisville, Ky. to Maryland on Monday afternoon. It will be the earliest arrival by a Derby winner since Monarchos was shipped to Baltimore four days after his 2001 victory.

Kentucky Derby-winning trainer Doug O’Neill confirmed to track president Tom Chuckas and other Pimlico officials on Sunday morning that Reddam Racing’s I’ll Have Another will be headed to Baltimore for the Middle Jewel of the Triple Crown.

Chuckas called O’Neill shortly after his appearance on NBC’s “Today” show to congratulate the Southern California-based conditioner and to personally invite him to the Preakness.

O’Neill was still basking in the glory of his first Derby victory.

“I am going to stay up here as long as we can. I don’t want it to end,” O’Neill said. “If I could push the button to slow it down, I would have. It is just so cool.”

O’Neill said that I’ll Have Another came of the Derby in great shape. The Robert Lewis (G2) and Santa Anita Derby (G1) winner caught Bodemeister with 100 yards to run and won by a 1 ½ lengths.

“The colt looks great this morning,” O’Neill said.  “He licked his feed tub, was jogging sound and had great energy. He looks fantastic.”

Seven of the next 10 horses that followed I’ll Have Another across the finish line – including runner-up Bodemeister, trained by five-time Preakness winner Bob Baffert – are considered as possible candidates to start in the Preakness. Decisions on whether they will compete at Pimlico will be made by owners and trainers during the next week.

The group of runners that could continue on from the Derby is comprised of Went the Day Well, 4th; Creative Cause, 5th; Liaison, 6th; betting favorite Union Rags, 7th; Hansen, 9th and Optimizer, 11th.

There are seven possible new shooters for the Preakness: Pretension and Brimstone Island, the winner and runner-up from the Canonero II Stakes Saturday at Pimlico; Cozzetti, trained by Dale Romans, who saddled the 2011 Preakness winner, Shackleford; the top two finishers in the Derby Trial (G3), Hierro and Paynter; Jerome Stakes (G2) winner The Lumber Guy and Sagamore Farm’s stakes-placed colt Tiger Walk. 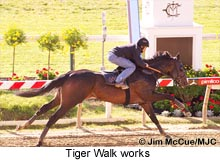 The Preakness is limited to 14 starters but for the first time will have two available spots for also-eligibles. Seventeen of the last 20 years have seen double-digit starters.

I’ll Have Another will be O’Neill’s first Preakness starter. He last ran a horse in Maryland six years ago when Thor’s Echo took the Frank J. De Francis Memorial Dash (G1) on his way to an Eclipse Award as the nation’s top sprinter. The colt’s owner, Paul Reddam, has had one previous Preakness starter, Wilko, who was 12th in 2005.

About two decades ago, Hall of  Fame trainer D. Wayne Lukas started a trend of waiting until the Tuesday or Wednesday of Preakness week before shipping to Baltimore. That approach became the norm, but O’Neill is anxious to get his colt to Pimlico.

“I want to do whatever is in the best interest of the horse,” O’Neill said. “On paper, getting there early made sense. As long as the track is open and they let us train on it, we’re in. We’re looking forward to getting to Baltimore.”

I’ll Have Another and seven other O’Neill horses will arrive in Baltimore on a Tex Sutton charter that is expected to land at Baltimore/Washington International Thurgood Marshall Airport around 4:30 p.m. Eastern. The O’Neill runners will be bedded down in Barn D, next to the Preakness Stakes barn.

Baffert’s Preakness candidates will stay at Churchill Downs this week. He is scheduled to return to Kentucky from California next weekend to look at his horses and decide their Preakness status.

Before he headed home to California Sunday, Baffert said it was too early to tell whether Bodemeister might be able to run in the Preakness after setting a fast pace in the Derby.

“With Lookin At Lucky, the day after the Derby I told them, ‘We’re not going to run,’” Baffert said. “The next Monday I said, ‘Not only are we going, we’re going to win this.’ I’ve got to wait and see if he shows me a spark.”

Baffert said he has found success at Pimlico by being patient and running horses he felt were ready to win.

“I’ve won the Preakness because I’ve gone over there with a horse that I knew was really doing well and was a good horse,” he said.  “I always use the Derby as a prep for the Preakness.”