BALTIMORE, 05-12-14---Andrea Seefeldt Knight has never considered herself a legend. On Friday afternoon at Pimlico Race Course, once again, she becomes one. 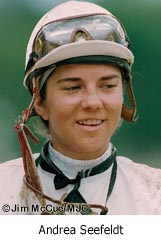 After a two-year absence, the 51-year-old Maryland resident returns to the lineup for Lady Legends for the Cure, which brings together an elite group of eight retired female riders in a pari-mutuel race.

It is the fifth and final year for the event, which was conceived in 2010 as a way to celebrate the women who blazed a trail for future female jockeys as well as raise awareness and funds in the fight against breast cancer.

The Lady Legends for the Cure V, presented by Wells Fargo, is the focal point of “The Ultimate Girls Day Out,” a partnership between Pimlico; the local affiliate of Susan G. Komen for the Cure, global leader of the breast cancer movement; and, for the first time, Baltimore-based Suited To Succeed in a day supporting issues important to women.

Supporting the Lady Legends race are eight stakes including the 90th edition of the $500,000 Black-Eyed Susan (G2) for 3-year-old fillies, the $300,000 Pimlico Special (G3) for older horses, and the $50,000 Xpressbet Hall of Fame Jockey Challenge featuring seven of the eight active Hall of Fame riders.

For the second straight year, a live concert will be held in the public infield beginning in late afternoon. Performing this year are Counting Crows, Grammy-nominated The Fray and rising country star Annie Bosko.

“It’s quite a draw. Everybody loves it,” Seefeldt said. “I know a lot of people that came the first year that keep coming back every year. They’d never been to the races before, and they love Black-Eyed Susan day. It’s a really fun day for people to come to the races. It’s not crazy crowded like the Preakness, but there’s still good horses, jockeys, trainers, owners. It’s a great day of racing.

The first woman to win the Pennsylvania Derby and one of only three to ride in both the Kentucky Derby and Preakness, Seefeldt finished second to Gwen Jocson in the first Lady Legends race, and was second to Mary Wiley-Wagner in 2011. Joining her this year from the original 2010 cast are Patti ‘PJ’ Cooksey, a breast cancer survivor and the first woman to ride in the Preakness, and Cheryl White, the first African-American female rider.

Barbara Jo Rubin and Jennifer Rowland-Small, who each took part in the inaugural event, were injured in training this week and will miss the event for the first time. They have been replaced by Kaymarie Kreidel, who currently works as an outrider on the Maryland circuit, and Sharon Frances Gunther.

Returning from last year are Abby Fuller, who in 1985 became the first woman to sweep New York’s Triple Tiara with Mom’s Command, a horse bred and owned by her late father, Peter; and Stacie Clark-Rodgers, a Sovereign Award nominee for top Canadian apprentice who rode 87 winners from 1993-96.

In addition to Kreidel and Gunther is fellow newcomer Tammi-Purcell Burkland, a Texas native who is the only female jockey to win the All American Futurity (G1) Quarter Horse race.

Carded as the third of 13 races (1 p.m. post time), this year’s Lady Legends race is a $52,000 allowance at five furlongs on the turf course. The 7-5 program favorite is Big Lute, trained by Tony Dutrow and ridden by Gunther.

“I’m as excited as I can be,” said Cooksey, who lives in Kentucky. “It’s exciting every year. It just keeps getting better and better. Everyone in Maryland racing really knows how to treat people. It’s so much fun to go up there, and we look so much forward to the event every year.”

The inaugural Lady Legends event was the first pari-mutuel race of its kind, profiled on NBC and filmed as the climatic ending to the feature-length documentary, ‘JOCK,’ chronicling the story of the first generation of lady riders.

Born in Illinois, Seefeldt also lived in Florida before settling in Maryland at the age of 8. Retired since 1994, she won 604 races and nearly $8 million in purses starting in 1981, including 37 stakes. She won seven stakes on Star Minister and the 1991 Pennsylvania Derby on Valley Crossing for late trainer Dickie Small.

“I got into it the first year for the breast cancer awareness and support and, hopefully, to figure out prevention, as well as support the people who are going through it and their families,” said Seefeldt, who lost her mother to breast cancer nine years ago. “It’s also about getting more people interested in the races. Racing was good to me, so if I can help promote it in any way, I’d like to.”

Now a competitive clay skeet shooter, Seefeldt made her professional race debut in Maryland and rode her first career winner at Delaware Park in 1981. She was the third woman to ride in the Kentucky Derby, following Diane Crump and Cooksey, and the second after Cooksey to have a mount in the Preakness.

Seventh with Looming in 1994, Seefeldt was the last woman to ride in the Preakness until Rosie Napravnik was third with Mylute last year.

“I’ve put a lot into it this year,” Seefeldt said. “I started two months ago. My first day out it was 20 degrees with six inches of snow on the ground and still falling. I’ve been out pretty much every day and I’ve hustled the backsides at Pimlico and Laurel to get as much work as I can. The first two weeks were terrifying, because you know what you want to do but your body can’t do it yet. The last two weeks is just a lot of fun, because you’re fit and it’s fun riding the horses, and I’ve been getting on nice horses.”

In 1985, Cooksey broke ground by finishing sixth with Tajawa in the Preakness. She retired in 2004 after a 26-year career with nearly $19.9 million in purse earnings, and ranks as the third all-time leading female jockey with 2,137 wins.

“I guess people kind of adore us,” Cooksey said. “We literally work our tails off to get there, because it’s not a joke to get ready to ride a race. It’s physically and mentally exhausting. Each year, I have to work very hard and, hopefully, I’m fit enough. It does take a lot of work coming up to the race.”

Cooksey’s best Lady Legends finish came last year, when she ran third aboard Outbacker. She was fifth in the inaugural 2010 running.

“I think that’s the main thing, that people are looking forward to it now,” Cooksey said. “I’m sure they were probably a little worried about a bunch of old ladies coming out of retirement and riding a race. I think they realize that it wasn’t just a fluke, that we’re all very competitive and we all worked very hard to get there. I think we’ve made a good showing each year, and I think it’s a really good event that the fans enjoy. The cause is very dear to my heart, and I think the women fans have embraced it. Everybody knows where the women are the men follow, so we get a good following.”

On Feb. 22, 1969, Rubin, now 65, became the first woman to win a pari-mutuel race against males at a recognized track aboard Cohesian at Charles Town in West Virginia, when she was 19. Later that year she was the first female named to ride in the Kentucky Derby, but missed the race when her mount, Picnic Fair, was scratched.

Rowland-Small, 61, was the top pioneer female rider in Maryland during the 1970s and a previous Lady Legends winner, taking the 2012 edition with Class Rules.

White, 60, made her riding debut on Ace Reward, a horse owned by her mother and trainer by her father, Raymond White, who also started two horses in the Kentucky Derby. A winner of five races on Oct. 19, 1983, White was also the first female steward at a California racetrack.

This will be the third Lady Legends race for Fuller, 55, who finished second in 2011 and fifth last year. Originally retired in 2002, she briefly returned to riding in 2012 and shows 582 wins and $5.4 million in career purses.

Kreidel, 42, was a regular on the Mid-Atlantic circuit and won 190 races and more than $3 million in purses between 1992 and 2006. In 2004, she captured her first stakes victory in Maryland on 19-1 long shot Jorgie Stover in the Harrison Johnson Memorial Handicap.

Lady Legends participants, along with Rubin and Rowland-Small, will take part in an autograph session on the first floor grandstand starting at 10 a.m.