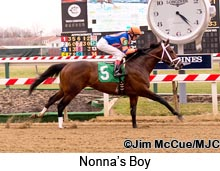 Sent to post as the 4-5 favorite in a field of eight assembled for the $42,000 entry-level allowance, the Todd Pletcher-trained Nonna’s Boy showed no rust from a eight-month layoff in the six-furlong sprint. Away from the gate in good order, the 3-year-old son of Distorted Humor rated comfortably in third along the backstretch under jockey Trevor McCarthy before making a three-wide run on the far turn.

As pacesetter My Vet’s a Genius gave way on the turn into the homestretch, 65-1 long shot Hertzalot took over at the top of the stretch, only to meet a strong challenge from Nonna’s Boy. Repole Stable’s favorite moved away to a commanding 2 ¼-length victory, achieved in 1:12 2/5 for the six furlongs.

“It set up perfect, just how we wanted. Todd just told me to keep him relaxed the first part of the race, not rush him there, just let break on his own. He said, ‘I want to see him running the last part.’ Today, I didn’t have to do much work on him, except hang on,” McCarthy said.

Saddled by a New York assistant trainer, Cecil Estevez, Nonna’s Boy was making his first start since finishing off the board in the Saratoga Special (G2) on Aug. 10. He had previously broken his maiden at first asking at Belmont Park and finished fourth in the Sanford (G3) at Saratoga.

“It’s a big deal to ride for Todd. He does a great job and he’s the leading trainer in the country every year,” McCarthy said. “It’s a big privilege and I really appreciate it.”

Herzalot, ridden by Alcibiades Cortez, held second money to complete a $128.00 exacta with the 4-5 favorite. Any Court Inastorm and jockey Jevian Toledo finished third, another 1¾ lengths back.

Apprentice jockey Nik Juarez returned to action at Pimlico Friday for the first time since being injured in a mishap at Monmouth Park on Sept. 28. The 21-year-old Westminster, Md. native made it back to the winner’s circle with his first mount back, It All Adds Up ($12.80) in the second race.

Saturday’s nine-race program will offer several special promotions, including “Preakness Meet at Pimlico” T-shirt giveaway and 3-Buck Cup giveaways. The first 4000 fans and Maryland-licensed trainers and owners will receive the T-shirt with the new Preakness Meet logo. The Pimlico souvenir 3-Buck Cup may be brought back from April 6 through June 6 (with the exception of Black-Eyed Susan Day and Preakness Day) for the purchase of $3 drafts.

Saturday will be Jockey Celebration Day – a tribute to Pimlico’s riders for the benefit of the Permanently Disabled Jockeys Fund. Fans will have a chance to win one of three Jockey Fan Packs that will include a photo with the winning jockey in the winner’s circle, a commemorative photo frame and a $50 betting voucher. Autographed photos of the leading jockeys will be available for a $10 donation. PDJF wristbands will also be available for a donation at the grandstand entrance.