BALTIMORE, 05-11-14---Already a three-time winner this year, Joint Return goes for her biggest payday yet in the 90th renewal of the $500,000 Black-Eyed Susan Stakes (G2) on Friday at Pimlico Race Course.

Trained by John Servis for Main Line Racing Stable, Joint Return will break from the rail in a field of 11 for the 1 1/8-mile Black-Eyed Susan that includes a pair of horses from trainer Todd Pletcher, a three-time race winner.

One of Pimlico’s oldest stakes races, first run as the Pimlico Oaks in 1919, the Black-Eyed Susan for 3-year-old fillies is 10th on a 13-race card worth nearly $1.6 million in purses and featuring eight stakes races, including the historic $300,000 Pimlico Special (G3). Both races will be part of NBCSN’s live broadcast from 4-5 p.m. First race post is noon.

Also on Friday’s card is the $50,000 Xpressbet Hall of Fame Jockey Challenge featuring seven of the eight active Hall of Fame riders, and Lady Legends for the Cure V, presented by Wells Fargo. The first-ever pari-mutuel race showcasing retired female riders, it is being held for the final time.

For the first time this year, Pimlico has partnered with the local affiliate of Susan G. Komen for the Cure, global leader of the breast cancer movement, and Baltimore-based Suited To Succeed for “The Ultimate Girls Day Out,” to support issues important to women. 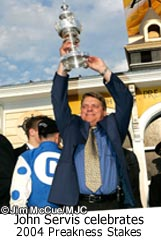 Servis’ last graded stakes victory at Pimlico came in the 2004 Preakness Stakes (G1) with Smarty Jones, who repeated his triumph in the Kentucky Derby before falling short in the Belmont Stakes, finishing second.

A sophomore daughter of Maryland-bred 2001 Pimlico Special (G1) winner Include, Joint Return has won three of four starts this year, most recently taking the 8 ½-furlong Calder Oaks by 1 ¾ lengths on April 12.

The race came only two weeks after Joint Return was fifth of seven, beaten 12 ½ lengths, under regular rider Kendrick Carmouche in the Gulfstream Park Oaks (G2), her only previous graded stakes attempt.

“She just didn’t run her race,” Servis said. “She just didn’t show up. Kendrick said she never took a hold of the bit at any part of the race and, for whatever reason, she just wasn’t there.

“I’m looking forward to this race, big-time,” he said. “She’s run well against some decent fillies. The only time she ran against real quality fillies was at Gulfstream, and she didn’t show up. I’m anxious to see how she performs this week against the better fillies.”

Joint Return ended her 2-year-old season with a one-mile maiden victory at Parx Racing in mid-November, then came back to beat winners at first asking on Jan. 1. In her stakes debut, she rallied for a 4 ¼-length triumph over Black-Eyed Susan contender Vero Amore in the $100,000 Busher at Aqueduct on Feb. 1.

“That’s the way she’s run from day one,” Servis said of her closing style. “Early on in her training, she wasn’t a very good work horse. I was thinking that she’s probably eventually going to need blinkers and that would probably make her focus in more and make her a better filly, but she’s just been running so good.

“She’s so laid back,” he said. “She’s a very classy filly. I would say her turn of foot is probably her best asset.”

Though the Black-Eyed Susan has always been in the mix for Joint Return, the race became more of a focal point after Servis decided to bypass the Kentucky Oaks (G1) on May 2.

“When she threw in that race at Gulfstream, obviously I was very disappointed and that steered us away from the Oaks,” Servis said. “After the bounce-back race at Calder, we just started to focus in on the Black-Eyed Susan.”

Pletcher won his first Black-Eyed Susan in 2005 with Spun Sugar, and followed up with Panty Raid in 2007 and In Lingerie in 2012. He returns this year with multiple graded stakes winner Stopchargingmaria and Grade 3-placed Sloane Square.

Stopchargingmaria won the Tempted (G3) and Demoiselle (G2) at Aqueduct to close her juvenile campaign last year, but has yet to recapture that form in 2014. A well-beaten fifth in her 3-year-old debut, the Davona Dale (G2) at Gulfstream Park, she was fourth in her most recent effort, the Fantasy (G3) at Oaklawn on April 5.

“I think like a lot of horses, her running style didn’t suit the way Gulfstream was playing at that time of the season,” Pletcher said. “We shipped her to Oaklawn and she ran a little better, although I didn’t think she ran to her full capabilities. Now, she seems to have moved forward and has been training very enthusiastically, indicating to us that she’s back in form. Hopefully, that turns out to be the case.”

Unraced at 2, Sloane Square debuted with a pair of victories this year by a combined 11 ¾ lengths, stretching out each time. She won a Gulfstream maiden going 5 ½ furlongs on Jan. 19 and romped over winners on Feb. 21 at Calder before finishing second as the favorite in the one-mile Bourbonette Oaks (G3) on the Polytrack at Turfway Park last time out.

“Sloane Square has run well in all three of her starts, and I thought she fought hard in the race at Turfway,” Pletcher said. “She tries hard every time. She has stepped up in class and distance each time, and has run well. She’s a filly that’s always very businesslike and trains very professionally, so we’re hoping she can step up to that next level.”