“It is the first-ever horse show that is Thoroughbreds only and the first at a race track,” said Maryland Jockey Club racing secretary Georganne Hale. “The idea of having  this was to make people aware that Thoroughbreds can have other occupations after the racetrack.”

The Totally Thoroughbred Horse Show is the brainchild of Hale and Stacie Clark-Rogers, manager of the Adena Springs Retirement program in Canada. Each horse will show under its Jockey Club name. The traditional show horse has his name changed often when it changes owners or circuits.

“It is really important to see how Thoroughbreds can be utilized outside of racing,” Clark-Rogers said. “Mr. and Mrs. Stronach (owners of Adena Springs and the Maryland Jockey Club) support this effort and want owners to be held responsible for finding an aftercare solution because Thoroughbreds are capable of doing all kinds of disciplines. We have programs at Gulfstream Park and Santa Anita and hope to change people’s awareness by letting them know there are options to complete the circle.” 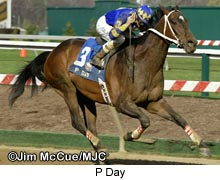 Some of the familiar names already entered are 19-time winner Outcashem and six-time stakes winner P Day, who earned nearly $700,000 during his 57-race career, including a victory in the 2003 Baltimore Breeders’ Cup Handicap (G3) at Pimlico.

“He was such a cool horse who was bred and trained by Charlie Hadry. He won races going long and short, on the main track and on the turf. He has had a great career as a show horse after retiring in 2005 and it will be fun to see him again,” added Hale. “We also have many horses who were trained by Scott Lake, Hugh McMahon, Ann Merryman and Linda Gaudet. It will be interesting to see how many horses recognize the track.” 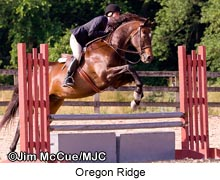 Oregon Ridge never competed at Pimlico but was purchased by Jeanne Vance of Taylor Purchase Farm in northern Baltimore County for $800,000 as a yearling and ran twice as a 4-year-old in 2002. The son of A.P. Indy was retired to the farm after an injury and was gelded. When Vance passed away in 2003, Oregon Ridge was given to show jumping trainer Betty McCue, wife of Maryland Jockey Club photographer Jim McCue.

“He is the champion show jumper of Baltimore County,” Jim McCue said. “He is nothing but class.”

There will be eight different classes during the day, with six ribbons awarded for each class and more than $4,000 in prize money.

“Having the event at the track is a venue where we can show where the current show horses got started,” Clark-Rogers added. “I’d like to see every racetrack in North America hold a horse show during its off-season. Most horsemen and horsewomen love the horse and we are doing this for the horse and letting the public know what happens to them when they finish racing.”

Prize money will be paid to the owners of the first three finishers in each class (60%-winner; 30%-second place; 10%-third).

“The money that we make through entries will go to horse rescue charities that have helped us find homes for horses that raced in Maryland: Kim Clark’s Thoroughbred Placement Resources, Mid-Atlantic and Angel Acres,” Hale said.

Just Plain Jumps will hold a 50/50 raffle with 50% of the proceeds going to the three horse rescue charities.

The judges will be Rodney Jenkins and Steuart Pittman.

Jenkins, one of Maryland’s top trainers since 2000, dominated the American show ring in the 1960s, '70s and most of the '80s, and retired as the sports winningest rider. The 67-year-old was inducted into the Show Jumping Hall of Fame in 1999. He won more than 70 grand prix classes, rode on ten winning Nations Cup teams from 1973 to 1987 and earned two silver medals in the 1987 Pan American Games as a member of the U.S. Equestrian Team.

The Totally Thoroughbred Horse Show will begin at 10 a.m. Eastern. The rain date is Sunday, July 15.